From Neocron Wiki
(Redirected from Techhaven)
Jump to: navigation, search

Tech Haven is a massive installation located below the wasteland mountains. Formerly a neutral trading point, it is now the home of the Fallen Angels.

Tech Haven was founded in 2633 by a group of young scientists seeking freedom from the opressive PSI monks. They erect a small base within the wastelands that eventually grow into the massive facility that can be seen today. This group would later become the faction known today as the Fallen Angels.

Tech Haven has long been the trading hub of Neocron especially so after the release of Beyond the Dome of York. A neutral ground centrally located within the wastelands and one of the few safezones in the early days after the release of BDOY. Recent changes in the games faction structure has seen a dramatic change however, Tech Haven is no longer a safezone and the preferred trading grounds have instead been relocated to the plaza sectors. This means that the ones bustling commercial centre is now largely abandoned. 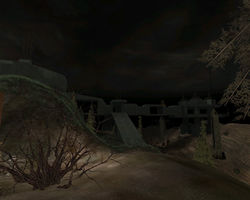 If your fraction is enemies with the Fallen Angels, you may want to enter via the northern F 07 entrance as the southern E 07 entrance is guarded by two laser cannons, but if you are fast and well-protected, you can run past them. You can still use the GeneReplicators located in Sector 2 as the Reprogrammed Copbots are neutral.