Idealistic, uncompromising, enthusiastic. That is what the men and women of the Twilight Guardian movement are or at least try to be. In their fight against the current despotic Neocron regime they are all determined to even give their lives if need be, in the fight which they have taken up to create a better future for the people of Neocron. Or to put it in their own words: “Freedom is our law!” But not all citizens think that they need to be saved from the current government...

This entrance is understated for the 3 seperate levels found below.

Level 2 is the Intelligence center complete with Citycom and analysts 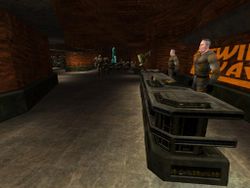 Level 3 is the Command center, the lowest level. Here you will find the Faction FSM

Twilight Guardian are allied to Brotherhood of Crahn and Fallen Angels. They are Neutral to Protopharm, Black Dragon and Tsunami Syndicate. Hostile towards City Administration, City Mercs, Biotech, Tangent Technologies, Diamond Real Estate and NExT.