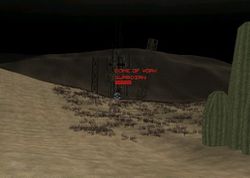 The equivalent of STORM Bots of Neocron City. When you see some teared-down brick walls or a set of antennas in the northern Wastelands, they are usually guarded by a DoY Guardian, however useless their duty may look like.

These NPCs are considered to be the "police" force of the Dome of York, the Pro City equivalent are the S.T.O.R.M. Bots.

TODO are they mechanical? categorize accordingly