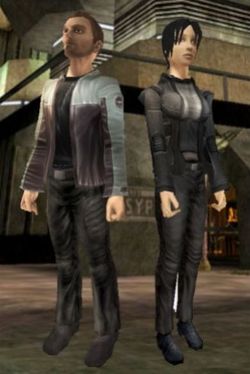 The Private Eye does not specialize in any particular area. All of his skills are comparatively weak at the beginning, although evenly developed.

A player choosing this class for his Runner strives for an balanced distribution of skill levels in all areas, but must be aware of the fact that this Runner can never be as good in any one skill as a class specializing in that particular area.

The Private Eye is your average Neocron citizen, who owns a small apartment in Plaza or Viarosso and leads a normal life. He moves from job to job and doesn't consider performing courier services for the local companies beneath him. However, he has the potential of becoming a bounty hunter, a Psi fighter, a playboy, or even a criminal. Nevertheless, it is a long road to any of those ‘positions’ for an average citizen.

The PE class caps their primary skills at the following levels:

The Private Eye, quite possibly the best solo class to be in the game Neocron 2 besides the hybrid monk. The Private Eye, or PE as it is best known, is the jack of all trades. He is not particularly good at one thing, but more than avarage at a lot of things.

Why should i be a PE?

Most people play PE's because they are relatively simple to use, and they make a great first character. Private Eye's do however have some negative aspects. To be a good Private Eye, most players will rely heavily on drugs, such as Redflash, Nightspider, Beast, etc. so they can use the full potential of the PE. Most PE's rely on drugs because they have lower skill caps than other classes, so to use the best weapons they can, they must drug.

What weapon to use

The majority of PE's use pistols, while others use rifles, and every once in a while you run across a PE using a melee or heavy combat weapon. Pistol and rifle Private Eye's are an example of their Spy characteristics, while when they use melee or heavy weapons, they portray their Tank characteristics. Most PE's would probably best their compeitiors one on one because of their Psi advantage. PE's are given the ability to Damage Boost, and Shelter, which combined with them using a high tech level weapon, such as a Slasher, people complain that they are over powered.

The biggest complaint about Private Eye's would have to be the PE that uses the Ionic Crossbow also known as the Xbow. Xbow PE's are able to use the most powerful pistol in the game, buff themselves better than any class in the game except for ppu's and some hybrids, and damage boost their enemies. Xbow PE's are probably the strongest solo character.