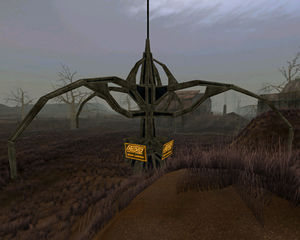 The ASG is an acronym for Automotive Sales Group known more commonly as the ASG. This is a place where vehicles can be called from storage by a runner. The design for the ASG garage was found in the Ceres Discs, and it is rumoured that the garage uses multi dimensional technology to send the vehicle to another dimension, through warp, and to bring back the vehicle when requested.

ASG also operate a chain of stores selling vehicles and vehicle equipment throughout Neocron, Millitary Base and Tech Haven. Although the shares of ASG are publicly traded, they operate as a subsidiary of Next, selling the majority of Next's civilian vehicles to the populace.

When a runner clicks on the terminal of the ASG they are presented with a list of all the vehicles that registered to themselves and that are not in the game world already. Clicking on a vehicle will allow the runner to either repair or "Spawn" the vehicle. Spawning the vehicle will make it appear somewhere in the vicinity of the ASG garage. If a vehicle is destroyed then it is removed from the ASG list, unless the vehicle is the NEXT Assault 4WD Chaincraft 'Reveler' from the Next Epic Mission or the NEXT Quad 'Compass' from the Jones Driver Mission, in which case when they are destroyed they can still be respawned from the ASG, but will need full repairs to be usable. This makes these vehicles the vehicle of choice for most runners within the Neocron world.