From Neocron Wiki
(Redirected from Monk)
Jump to: navigation, search 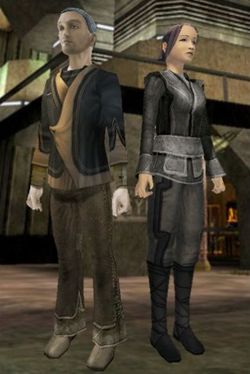 Physically, Psi Monks are at a considerable disadvantage, due to their historical evolution. Even with the greatest effort, it is nearly impossible for them to become good fighters in the traditional sense. In the area of Psi skills, however, all avenues of development are open to them.

Psi Monks were the ruling class in Neocron up until the Ceres Wars. Among other things, they created the genetic blueprints for the Gentanks, who turned the tide of the war in favor of Neocron. After the war was over the morally strengthened populace revolted against the heartless regime of the Psi Monks. The Monks were persecuted and driven underground. Following civil reforms and the introduction of the LawNet, they were rehabilitated and can now once again move freely in the city. Nonetheless, they are still despised – or at the very least distrusted – by the populace.

The PSI Monk class caps its' primary skills at the following levels: