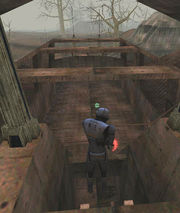 The Battle Dome arena, viewed from above

Located in wasteland sector J 04, is the arena known as Battle Dome, It is a place where Runners can fight without the risk of losing their most treasured items. Thats right, you don't drop a quickbelt in this sector!

The wastelands around the Battle Dome Arena are home to Warbots and Warbot Titans, as well as Mad Copbots, some other robotic creatures and also Launcher Cyclops. Making the area very popular for warbot hunting.