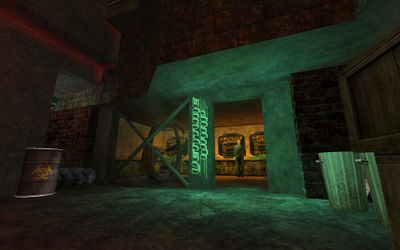 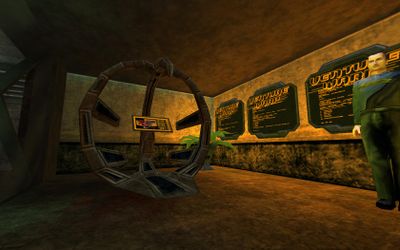 Venture Warp outlets can be found throughout the Via Rosso and Pepper Park sectors aswell as Techhaven. Each outlet is equiped with one or more Venture Warp station allowing runners to teleport from Neocron city to any place in the wastelands, with the proviso that the destination is not known, and can be any sector consider wasteland (See the map for more information). No Synaptic Impairment is obtained when using the venture warp, however this small benefit does not outweigh the intrinsic problem of not being able to choose where you wish to go. The teleportation destination is always the reset point within a sector - generally the most central point of the sector.

The venture warp utilises the same principles as the GeneReplicator and GoGuardian however very little is known of the scientific principles behind the system. Once a runner accepts the warning which is transmitted to their RPOS system, pays the fee required to use the system, then their body is teleported to a random point within the wastelands. This can be used for recreation when runners have nothing else (and too much money) to do. It can also be used when a runner wants to activate some new genrep stations in the wasteland, but has no vehicle.