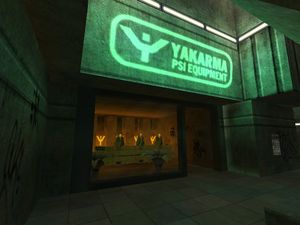 The Yakarma shop and logo

The Yakarma Stores were the only places in the Neocron world to obtain Psionic modules before the exodus of the Anti City into the Dome of York. During the last few months before the second Dome of York war, all Yakarmas were closed by the Cityadmin Copbots.

Although no longer in Neocron 2, the Yakarma shops are considered to have been renamed by the Brotherhood of Crahn to Brothers in Arms during the exodus between Neocron 1 and Neocron 2. Yakarma ad's still appear however on billboards around Neocron.