Having played the games of power on both sides, as rulers as well as persecuted underdogs, in recent times they seem to have withdrawn their activities to the field of PSI research and the production of PSI devices. Apart from their ever present religious acitvities of course.

Three former brothers got expelled from the Brotherhood.

The Crahn FSM is located in the headquarters in Pepper Park SEC-3, not in the Outzone Crahn church. 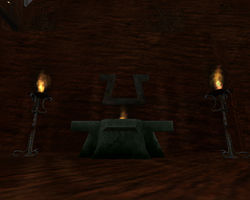 Crahn Alter in the Canyon Facility

The Crahn logo can be found throughout the world of Neocron one notable location is the Crahn altar in the Twilight Gaurdian Canyon Facility. There is also a Crahn church in Outzone sector 9, housing the faction offices. In the lower level, the sect keeps Aggressors 24/24 in cages. In the most eastern cell block, there is a ladder going down into a tunnel into A 06, see Neocron city entrances. On the top level and further up the ladder is a supply box. Their HQ, called Brotherhood of Crahn Monastery, is located in Pepper Park sector 3. It even features an own Genrep. The Brotherhood also operates the Temple of Cleaning Fire. In the Dome of York sector TODO, there is also an impressive but abandoned Crahn church. Tawkeen Village also features a Crahn monastery. There is a group of brothers, who have held up a small prayer room inside the Club Jailhouse in Outzone SEC-8.