From Neocron Wiki
(Redirected from Genrep)
Jump to: navigation, search 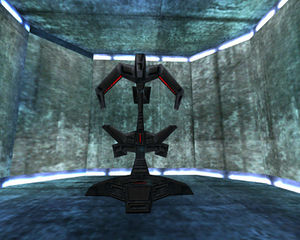 A Gene Replicator in Techhaven

The Genereplicator is a form of teleportation device found all across neocron.

It has been speculated, based on the name, that the Genereplicator may be a cloning device of sorts and that its teleportation function work by killing the user at one end and then cloning his DNA at the other. However this poses the question of how equipment is transfered with as a cloning device would presumably only produce a naked copy at the receiving end. It could be however that the Genrep system work in unison with the GOGO universal storage. This could very well be feasible as a GOGO terminal is always found in close vicinity to any Genrep station. As the genrep system is never mentioned anywhere within game lore other than denoting its usage it is difficult to establish whether this is correct or not.

Genreps are used as access points to hacknet. Successfully hacking the genrep station will send the player into hacknet. The point in hacknet where the player is sent depends on the Genrep being hacked.

All hacknet exit points are also directly connected to a genrep station within the real world.

Gentanks are the only class that cannot hack a Genrep to enter Hacknet.