From Neocron Wiki
(Redirected from Cityadmin)
Jump to: navigation, search 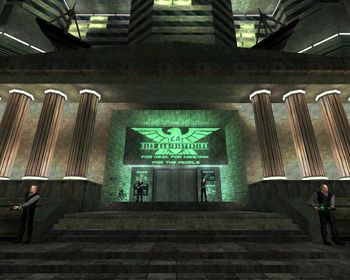 Traditionally, this building and it's predecessors have always been the seat of power in Neocron.

"For Reza, for Neocron, for the people."

City Administration, or CA, is the ruling faction of Neocron city. They are the banks, the police the stock exchange etc. They are the foremost political force in Neocron city. Their Copbots and STORM Bots, the NCPD, form the basis of law and order inside Neocron. The leaders of CA maintain that freedom was an unknown concept until their great leader Lioon Reza formed the City Administration and the NCPD. Others, of course, might say otherwise.

A grand and dominating building of steel, concrete and glass the City Administration Headquarters can be found in the heart of Neocron in Plaza sector 1.

City Administration are allied to Biotech, Tangent Technologies, Diamond Real Estate, NExT and Protopharm. They are Neutral to the Fallen Angels and City Mercs and hostile towards Black Dragon, Brotherhood of Crahn, Twilight Guardian and Tsunami Syndicate.

The current president of Neocron is currently unknown.

Jack Red was killed on the steps of the City Administration HQ by Alex Mendez.

It is not without irony that the iron fisted City Administration was formed through rebellion. In 2722 Lioon Reza, at the time an ex-member of the secret service, founded a group of terrorists to overthrow the crippling regime of the Psi Monks. In 2724 he succeeded and the following year he became the new dictator of Neocron. This is also when the City Administration and NCPD were founded in order to consolidate the new rulers' position. The influence and ranks have grown to the point where City Administration has complete control over Via Rosso and Plaza districts.