From Neocron Wiki
(Redirected from Hack)
Jump to: navigation, search

Hacking (HCK) is a Intelligence-based subskill.

Hacking is done by firing your hacktool at a hackbox, hackable IF, Outpost mainframe, Genereplicator or locked robotic corpse such as a Warbot.

In order to hack you ofcourse first need a hacking tool. These can be aquired from any Cryton's Techtools or Tech Angels tool vendor. In order to use a basic TL 30 hacktool you will need an effective hack skill of 20 to use it at all; the only hacktool without that requirement is the Mr. Jones mission reward for the Hacker profession.

In order to sucefully hack most things though, you will need a substantially higher skill than this. Sewer crates require about 30 HCK, Sentinal/Cyberguard bots 50, Main Sewer access IF about 50, hacking quickbelts and backpacks is said to require 150+.

The hacktool comes in various versions ranging from TL 30 to 90 however at the time of this writing there is no difference between them, other than the pricetag.

If the target has not been hacked recently or currently being hacked by another player then the mini-game interface will appear, which will look something like this: 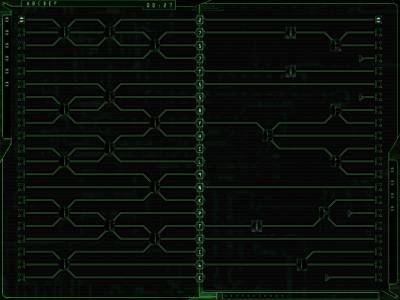 There are a number of key parts to the hacking interface that you need to know about. The following sections describes them.

At the top of the screen you will see a timer. This indicates the amount of time you have to make a successful hack.

Although not known for sure, it could also be affected by your Intelligence skill. Many subskills seem to be affected by their main skill level as well. I will try to confirm this as soon as possible.

Running along the bottom right hand side of the screen you will see the amount of nodes you need to activate to successfully complete the hack. Every time you activate a node one of these will light up.

Running down the middle of the screen are a set of nodes with wire connections from both sides. These are the nodes you need to activate. If a node is controlled by you then it will be a solid color, otherwise the AI computer controls it.

Both you and the AI computer have control of a pulser, that will send pulses down the wires. To move the pulser up and down the wires use the up and down arrow keys, and to send a pulse press the left mouse button.

The splitter will split one of your pulses through a number wires. A splitter may have between one and three inputs and between two and three outputs. Sending a pulse to any of the inputs will activate all of the output wires.

A joiner will join between two and three input wires into one output wire. To activate the output wire you must send a pulse to all of the input wires. Avoid these if you can.

You can recognize a joiner by looking for the two or three holes on the left hand side of the icon. Splitters only have one solid hole.

The terminator makes the wire it is connected to totally useless. It's only purpose is to make the hack harder. Do not send a pulse down a line with a terminator on it.

A switcher will reverse the owner of the pulse sent down the wire. If you send a pulse to a wire with a switcher then the connecting node will be activated for the AI computer.

Once the hacking interface comes up you will have thirty seconds to complete the hack. Within this time you must activate as many of the center nodes as you can, by sending pulses down the wires on your side. You control the left hand side and the AI computer controls the right hand side.

Take the first few seconds to scan your side and figure out your strategy. When you have decided what wires you want to send pulses down, use your arrow keys to guide your pulser up and down, and press the left mouse button to send the pulse. When the pulse reaches the node it will activate it.

While you are doing this the AI computer will be doing the same thing, in an effort to stop you successfully completing the hack. Once you have activated a node the AI computer may send pulses down it's wires to activate it for themselves. This battle for control over the nodes continues for the thirty seconds.