Regant was the first hereditary leader of Neocron and the son of Thor. 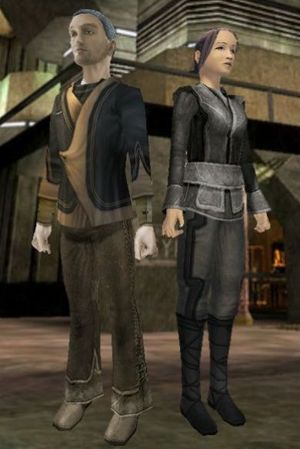 In 2565 leadership of Neocron was passed on from its conqueror, Thor, to his son Regant as Thor believed himself too old to govern the city. Regant sought to develop Neocron into the greatest city of the new world. At this point the construction of York is nearing its completion. As a result of the insight gained from the Ceres disks, York has been organised as a city of the 22nd century and as such it is outfitted with a rigid dome of the same design as the one that protected Tokyo centuries before. Regant however does not believe in the concept of a rigid dome and with the help of Caalron, the successor of Mecando, he creates a design for a magnetic shield that will reflect more than fifty percent of the radiation without a physical structure, thus allowing Neocron to expand freely. Despite the shield the people of Neocron still suffer the effects of radiation disease and so Regant contacts the now 65 year old Ceres for a copy of the Ceres Disks to improve the design. However Ceres suprisingly refuses, citing his warnings against the bloodshed in Thors conquest of Neocron and refusing all partnership with the people of city. Regant however insisted on his right to access the disk, pointing out that without his father's help they would never have been recovered. Ceres however is persistent in his views and Regant is left no choice but to give up on his plans. 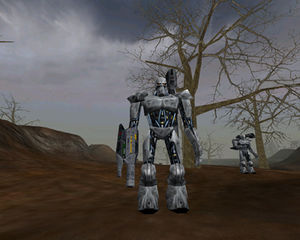 Years later as Neocron is ravaged by a terrible plague Regant turns once again to Ceres pleading him to let the disks be searched for a cure. Ceres however states that the plague is the vengeance of The God Of The Blinding Light sent as a punishment for the senseless bloodshed of Thor. Beside himself with rage, and failure to comprehend why Ceres would allow the demise of so many innocent souls, Regnat declares that there shall be more bloodshed and summons up his troops for an assault on York. Regant orders his PSI monks to utilise their knowledge of genetic engineering to create a stronger and more robust soldier. The monks intensely pursue this task creating a prototype, within just a few months, which they call the Tank. Outfitted with armored vehicles based on the design of 22nd century tanks Regant now has the army he needs to assault the Dome Of York. Regant Issue an ultimatum to Ceres stating that the knowledge contained within the Ceres disks should be accessible to all of mankind and that if Ceres will not make the discs accessible to everyone within the year of 2577 he will ensure the spread of the knowledge by force. 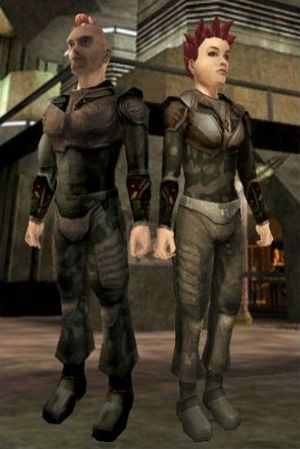 Ceres responds by declaring the disks his property and that Neocron has benefited more than enough from the knowledge. In response Regant deployed his army of GenTanks in an attempt to conquer the dome with a blitz offensive. He failed however to take into account the domes defenses. His warriors found the area around York littered with mines and spring guns and those who made it through faced the warriors of York piloting their Warbots. What should have been a short offensive campaign develops into the longest military conflict in the history of the new world. Sometime near the end of the war however Ceres scientists discovered the plans for an atomic bomb that would only destroy unprotected biological material and leave his warriors unscathed within their Warbots. He did not hesitate to detonate this device over the battlefield and thousands of Gentanks fell victim to the radiation. Regant's PSI monks however had already copied the shielding of the Warbots and used it to develop a new armored suit that would not only protect the wearer but also enhance reflexes and capabilities. With the tanks protected from radiation and their powers significantly augmented by these power armors Regant's army soon overran and conquered the dome. With the government overthrown and Ceres executed in public Regant seized all of the Ceres Disks and, as promised, opened up their knowledge to the people. A new leader for the dome was appointed from the ranks of Regants own administration and peace again settled over the new world. During this peace the PSI monks rose to positions of power in society taking control of the military. Regant however suffering heavily from the effects of radiation disease lost influence within the city. In the year 2611 Regant dies and his chosen successor is soon found murdered. The PSI monks take control of the city in his stead.

More than a hundred years after his reported death by radiation disease Regant has seemingly reappeared working towards restoring his power with a new order. An unknowing hacker found his DNA in the Hacknet and the Brotherhood of Crahn (or at least the Anti-City = Dome factions) recreated him using the genotoxic method, which gives endless life and health. (Source: Regant Industries Genotoxic Suit Mission mission briefing from Inquisitor Kaine.) TODO different info from Special Agent = ProCity version briefing?

This new Regant has been credited as the mastermind behind several events including sabotaging Neocron's food supply and the appearance of highly intelligent mutants near the ruins of the old Regants Fortress. He has also been credited with the murder of Lioon Reza as well as several assaults on Neocron.

Most recently H.I.O.B has taken credit for defeating Regant and security videos of a secret lab below Gaia Mine shows him being shut inside a room and bound to a Gene Replicator there doomed by the Hacknet terrorist to an endless cycle of deaths an rebirth's.