From Neocron Wiki
(Redirected from PvP)
Jump to: navigation, search

Player vs Player combat is what, to many people, the endgame of Neocron is all about. The four classes can each be potentially devastating if used correctly, awful if used incorrectly. PvP is not possible with a Law Enforcer installed.

Whilst in Neocron PvP is encouraged, indescriminate killing can be punished, through loss of soul light and faction sympathy. If your soul light gets too low (below -32) then you will lose your safe-slot, and drop several items when you die. Also, your belt will be easier to hack, meaning the dropped items are likely to be taken before you get the chance to retrieve them. Low faction sympathy can mean you cannot join a faction, or even run standard missions for a faction to increase your faction sympathy, instead having to run other longer, more difficult missions for little reward.

You see somebody, you shoot them. They shoot you back. Repeat until one of you dies, or runs away (see zone whoring or stealth whoring). Expect shit-talk - even if you don't indulge yourself, you need a thick skin - Neocron PvP isn't really for the faint of heart - it has been known for some to suffer from uncontrollable shakes whilst PvPing. Location is an important consideration; if you specialise in long range combat, then the wastes would be your ideal PvP arena of choice. For shorter-range based combat, the inner city sectors may be more appealing, although some guards and security mechanisms react to drawn weapons (and other items, such as stealth tools)

Players, who have their Law Enforcer taken out, have their name shown in yellow.

What Death Means In Neocron 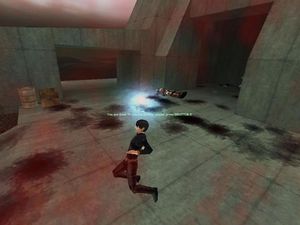 Upon dying, assuming there is no resurrection available, you are forced to GR either to your apartment, or any other GR that is both pre-tagged by you, and open to your faction. You will have to wait off 42% synaptic impairment (SI) and most likely have to get several implants poked back in. Also, some items of armour will be moved to your inventory. You do not drop implanted implants, though other non-epic items can be dropped, with the exception being an item in your safe-slot. Good soul light assumed...

Any item dropped with be dropped in your quick-access belt, which you drop upon dying. People skilled in hacking can gain unauthorised access to this item, the level of difficulty in hacking determined by how high your soul light is. Also, teamed runners can access you quick-access belt, to pilfer your goodies.

You'll also drop a dog-tag, if killed by another player. This is like a mini trophy, to show that someone has killed you, although not many people seriously bother in collecting dog tags.

In apartments, expect to be severely punished for attacking and killing anybody. In battlefield sectors (sectors which contain out-posts most typically) you may kill anybody with impunity. Quick-access belts do not drop in op sectors. Some sectors are secure - for instance HQs - which means that you may not draw a weapon at all.

Neocron's very own virtual frag arena, NeoFrag offers a great place to test setups and participate in PvP before you remove your law enforcer. In Neofrag, death doesn't matter. You right-click to instantly re-spawn with all your items & implants intact, and no SI. Whilst you can use LoM pills in NeoFrag, you cannot switch implants. Unique maps not used in the 'real' world include a castle, shopping mall style area, spaceship, and industrial unit. It is also worth pointing out that everything that happens in Neofrag, stays in Neofrag - lomming, droping items, etc, will be reset once you leave. Your character setup and inventory will be identical to when you entered Neofrag when you leave.

Neofrag arenas are located in Pepper Park Sector 1 and 2. 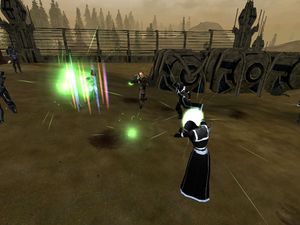 Outposts are a great platform for more organised PvP in Neocron. As all op fights take place in a Battle Field sector, people are positively encouraged to fight for whichever side they prefer. Basically, taking an op involves clanned hackers, and fighters, and a great deal more co-ordination than your typical spontaneous skirmishes.

From time to time, the event team organise large-scale one-on-one PvP tournaments, taking the form of mini-leagues, with smaller groups of fighters battling each other. These events are commonly known as Masters of the Universe events, or MOTU for short. The winner from each league is then entered into the final, where they fight the other group winners individually. Sometimes a last-man-standing round takes place at the end, with all finalists caged together.

There are always great prizes handed out to the winners, the top-ranking combatant typically receiving a coveted Gold PA.

In the past, runners have also organised Fight Night events.

PvP is often taken very seriously and in bad humour in NeoCron, and as such, a detailed and chaotic system of etiquette is informally in place. Terms such as ninja hacking, stealth whoring, ally ganking, zerging, clipping, noob killing, zone whoring and many more are often used to describe breaches of this code of conduct, and often as excuses from sore-losers.