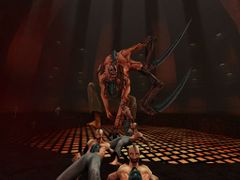 Regant's Legacy Bossroom - containing the Genotoxic Nightmare and other mobs

Regants Legacy (sometimes shortened to "Regants" between players when used in the context of hunting dungeons) is a special area in sector E 03 of the game map, recently opened as an expansion to Neocron since Evolution 2.1.

As it stands now, Regants is perhaps one of the best levelling areas in the game.

It has two main areas, one being a long winding corridor going down, ending in a space where you can enter the Boss Room, containing a boss Genotoxic Nightmare and numerous Genotoxic Sluggers and Genotoxic Crawlers, about 20 in number. The whole dungeon up to the boss room entrance contains 13 rooms, including the one with Corporal Lines and spans 3 floors.

Typically a team here would consist of a Tank or Spy with AoE taking aggro (getting the mobs to follow him/her). This person would then run in circles around the mobs, herding them together to allow focussed AoE damage. The boss room can be cleared by two well-equipped runners of combat rank 60.